Woman born with no womb gives birth to miracle twins 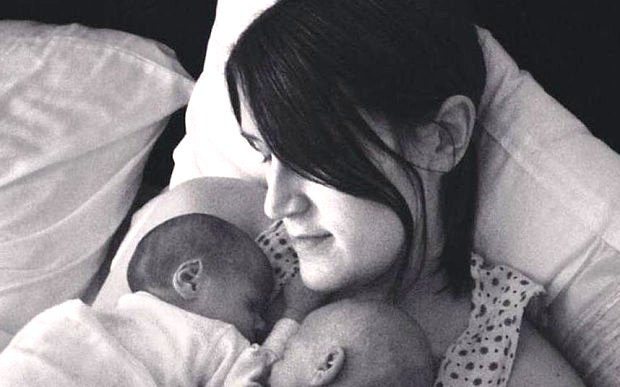 She was told at the age of 19 that she would never be able to give birth as she had no womb, ovaries or Fallopian tubes.
But nine years on she has given birth to the twins after IVF treatment using an egg donor.
Ms Haynes and her husband Sam, both 28, are said to be overjoyed.
She said she had no idea she was different when she was growing up but began to grow concerned when she had not started her periods by the age of 19, despite going through other signs of puberty.
Following months of hospital trips and blood tests, specialists told her she had been born with XY chromosomes, meaning she was genetically male. She had no reproductive organs thanks to a condition called androgen insensitivity syndrome.
Mrs Haynes, from north London, said: “When they told me I had no womb I was so confused I felt sick. My biggest fear was never having children. Suddenly a huge piece of my life was missing. I felt like half a woman and was embarrassed. How I was going to tell a guy I was genetically male when I started dating?”
She confided in her friend Sam, with whom she had been close since the age of 16 and who comforted her throughout her ordeal and later became her boyfriend then husband.
Mrs Haynes said: “He’s been my confidant from day one and so supportive. I was worried any man would run a mile. But with Sam I felt accepted and loved for who I was. But we still didn’t know if we would ever have children. We both wanted a family, but we just had to wait and see if the treatment worked.”
The first signs of hope that Mrs Hayne’s condition might be curable came in 2007 when a new specialist at Royal Derby Hospital found a tiny womb missed on previous scans.
She told The Mirror: “It was only a few millimetres, but it was a start. He was optimistic it would grow. I still couldn’t conceive naturally but I could have the option of IVF.”
Mrs Haynes was given a course of hormone tablets to give her the right levels of progesterone and oestrogen in order to create an environment where her womb could grow and stop her suffering osteoporosis.
In 2011 Mrs Haynes was told her womb was ready for IVF. But in a bitter blow their local NHS trust refused to fund free IVF, even though guidelines said it should. She said: “First I found I couldn’t have children, then I was told I could. Now they were denying us the help we needed.”
However the couple, determined not to give up, paid £10,500 – more than half their savings – for IVF treatment at a clinic in Cyprus last April.
Mrs Haynes said: “I was so nervous. We only had one shot and couldn’t afford to go through it all again. I desperately wanted to be a mother and knew if there were no viable eggs or the implantation wasn’t successful I’d be distraught.
“Of the 13 eggs harvested only two were viable. After they were implanted I spent the rest of our 10 days resting.”
Doctors told the couple there was a 60 per cent chance Mrs Haynes would get pregnant and she should wait two weeks before taking a test, although – overcome by excitement – she took one after 10 days.
She said: “I was so nervous I was shaking from head to toe. I peered at the test and it said positive. I couldn’t contain my happiness. I was jumping up and down and screaming, but Sam kept his cool and made sure we took another test before we celebrated.”
When Mrs Haynes went for her six-week scan she was shocked to discover both eggs had taken and she was expecting non-identical twins.
“I couldn’t believe it. I freaked out, but I was over the moon at the same time. I had the chance to have a complete family,” she said.
Mr Haynes added: “I felt numb with excitement. It was two for the price of one.”
Mrs Haynes said: “Although adopting was an option, we wanted the baby to be as close to ­biologically ours as possible by using an anonymous egg donor and Sam’s sperm.”
The pregnancy went well and in December her doctors decided to induce her two weeks early. She gave birth naturally to on Christmas Eve to Avery, at 5lbs 3oz, and Darcey, 4lbs 6oz.
Speaking publicly about the births for the first tine Mrs Haynes said: “Becoming a mother was the single most amazing moment of my life. When I held the babies in my arms for the first time I was overwhelmed. I had spent nine years coming to terms with the fact this might never happen, but in that moment all the pain just washed away.
“Darcey and Avery are the most beautiful little girls in the world. Even now, I can’t separate Sam from the girls because he loves them so much. We’ve spent so much on these babies. It’s not just our wallets that are empty. We are emotionally exhausted. But I’d do it again in a heartbeat for one cuddle with my girls.”
Dr Geetha Venkat, of Harley Street Fertility Clinic, London, described the case as “amazing”.
She said: “Normally in nature the female hormone oestrogen will help grow the womb. She’s lacking in the hormone, so they gave it to her with the HRT. She’s lucky she was born with the womb remnants. Technology has made this possible. It really is an amazing story.”